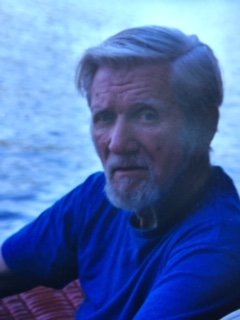 Richard Arthur Hodnett died peacefully on March 18, 2019, surrounded by his family
Richard (Dick) Hodnett was born in Toronto Western Hospital and was raised on a small
farm at Christie Street and St. Clair Avenue.  When he was eighteen, Dick joined
the rest of his generation answering the call of his country and enlisted in the Canadian
Navy.  He was a sonar operator on a Corvette that accompanied supply convoys
crossing the Atlantic.  After the war Dick joined Bell Canada, where he would work for
his whole career, mostly working in the early days of telecommunications and, at the
end of his career, with The Bell consulting in Saudi Arabia.

Dick built the first house that he owned.  The clerk at the building department told him
that his house plans were ‘the worst he had ever seen’ but it did not stop him. Later he
built the family cottage in the Muskokas (a much more successful project), which he
loved and at which he spent much time.  He was happiest when working on the yearly
to-do list of projects, taking special satisfaction from any job that involved climbing
ladders and risking life and limb.

Dick fell in love with his beloved wife Gudrun (Goodie) while travelling for business as a
regular on her Air Canada flights when she was a flight attendant.  His persistence paid
off and dinner turned into 58 years of happy marriage including ski trips to the alps,
teaching ESL in Inco, China and going on safari to celebrate 50 years of marriage.
Dick was a model citizen and a proud Canadian and Torontonian; he would
enthusiastically give directions to any tourist whether they needed them or not.  He was
a self-taught man, and an avid reader in a family of avid readers - and his enthusiasm
for reading and learning was contagious.  Dick took delight in any and all of the
accomplishments of his family - he reacted with unqualified glee to a beginner skating
performance, an assist in a hockey game, a top scoring Scrabble word, a university
graduation, an Order of Canada appointment.

Dick, aka Derek, Pops, Dad, Grandpa, Babu will be sadly missed and joyfully
remembered.  He was one of a kind and he loved us well.
Dick is survived by his wife Gudrun (nee Kieser), sons Christopher (Margo) and Mark
(Fiona), daughter Sandra and grandchildren Casey and Maureen.
A gathering will be held for family.