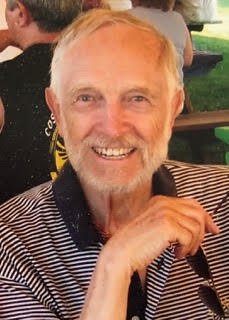 Stanley Herbert Cooper, 90, of Etobicoke, Ontario passed away peacefully on Wednesday,
March 20, 2019, at the Dorothy Ley Hospice in Etobicoke. He will be deeply missed by his
loving wife of 60 years, his sweetheart Corinne Lena Cooper (nee Watters), of Buenos Aires,
Argentina.

Stanley was born in Northern Ireland and completed a degree in Civil Engineering at
Queen’s University, Belfast together with Derek. They arrived in Canada in 1952 during the
major infrastructure revolution. By 1962, the twins started Cooper Consultants Ltd a
thriving downtown Toronto consulting practice. Stanley reluctantly retired at 80, but this
offered more time for his other passions.

While Stanley recently would be seen skippering “Striker”, he is best known to other Shark
racers as the captain of “Seventh Heaven” a unique 1970’s chocolate brown 24’ Shark,
Stanley was born to race and continued to do so until his late 80s with a variety of dedicated
crew. He served as Past Commodore of The Boulevard Club, Toronto and active member of
Etobicoke Yacht Club in Mimico. He rarely missed winning a weekly race.

Stanley and his twin Derek expressed life with a zest that was doubly potent. Stories abound
that Stanley shared with glee where the “double identity” often worked to surprising
advantage and humour. They were always a pair to reckon with! Robert Browning once
wrote that “a man’s reach should exceed his grasp, Or what is a heaven for?” Stanley lived
his reach to the fullest and heaven, on a daily basis, was constantly expressed in his
precocious sparkling blue Irish eyes. He had a natural love for classic literature and the
unerring principles of mathematics and had the intuition and skill to employ these
principles as an art form. From the maximized functionality of the pre-stressed or post
tensioned beam to the management of the whims of the winds on his favourite sailing craft,
Stanley loved to prove the theorems embedded in the art of true physics. Heavy seas were
never daunting, but he was a master of the precision of propelling his craft in the lightest of
winds beyond the belief of all that trailed him. He also loved to talk about it!

He was a gem of a man in compact frame with an effusive stature. His essence is captured in
the distinctive phrase often echoing in the distance before he approached; “Lovely, Lovely,
Lovely…” and we knew everything was good! As a lifelong Christian Scientist, Stanley knew
life to be eternal and purely spiritual.

The family would like to thank Dr. Jessica Zive, Mary Lou Fulton, the wonderful staff and
volunteers at the Dorothy Ley Hospice, and the in-home caregivers from Home Instead,
specifically Krishanthi, Deyang, and Malkit for their loving care of Stanley over recent
months.

The family would like to ask in lieu of flowers, donations be made to Dorothy Ley Hospice, Etobicoke.