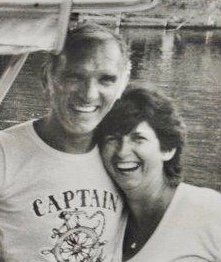 Kevin Williams passed away peacefully on June 9th 2020, surrounded by family. His happiest Memories were of being on his boat and being known as Captain Ken. He was well loved by everyone at the marina where he helped repair many motors.
He was born in Australia in 1932 to Jack Williams and  Therease Sullivan. He is survived by  two sisters Doreen and Marie whom he loved dearly, and a favourite niece Heather Lindsay who he adored. He was predeceased by his brother Jack.
He is pre-deceased by his first wife Betty-Ann Hill of 14 years and his second wife  Patricia Doyle of 43 years. He was lucky to have loved, and been loved by two wonderful women. He emigrated from Australia to Canada at the age of 18 and worked at Canteen of Canada for 38 years.
He leaves behind a large extended family of children Terry (Graham) Denise, Chris (Mary) Stephen, Lori,  Steven, John and Donald (Trish) who will all miss him dearly.

He will also be greatly missed  by his grandchildren Steven, Christina, Kent, Kaitlin, Kevin, Erin, Megan, Alex, Leah, Marcus, Bridget,  Owen, Ethan, Liam aas well as  his great grandson Patrick
The Captain will also be fondly remebered by his close friends who he spent many happy occasions, and vacations with. May there be a heaven of calm waters forever