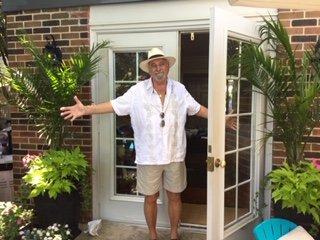 Ron was a world traveler, storyteller, and the man whose bright blue eyes could light up a room.

Ron was born to parents Philip and Aida Cutajar, on July 4, 1944.  He graduated from Ryerson University. After school, he spent three years working in London and traveling throughout Europe.  He spent the majority of his career at Giffels Associates Ltd in Toronto.

Ron married Andrea (Candy) nee Germa, the love of his life in 1971, who survives him.  Their mutual love of travel kicked off their life together with a trip around the world where they spent time living in England, New Zealand, and eventually settled down in Toronto, Canada to raise their family.

As a father, Ron instilled in his children some simple truths to live by: Never take the first offer; There are two rules in poker - don’t cry at the table and don’t ask for your money back; and Just relax – something that his daughter struggles with while his son has embraced wholeheartedly.

Ron was known for his quirky love of collecting antique corkscrews; a hobby (addiction) that allowed him to be a member of the Canadian Corkscrew Collectors Club and the International Correspondence Corkscrew Addicts Club where he and Andrea annually met with great friends and corkscrew enthusiasts at different locations around the world.

In retirement, Ron spent his winters in the Grenadines on the lovely island of Bequia where he had the great fortune of developing life-long friendships.  Known fondly on the island as “Mr. Ron” he was active as a fundraiser and volunteer teacher in the wood-working classroom at the Sunshine School.  He also volunteered for the Bequia Music Festival, and Bequia Sailing club Easter Regatta; events that he looked forward to every year.

Ron is survived by his daughter Jennifer and her husband Colin Thompson, son Anthony, sisters and brothers Joan Seminick (Danny), Frank, Mary Harvey (David) Phyllis Markel (Don), Danny (Debbie) and his brother-in-law Michael Germa (Susan).  He is pre-deceased by his parents Philip and Ada Cutajar and his brother John and sister-in-law Pat.

A celebration of Ron’s life will be scheduled at a later date.

In lieu of flowers, please donate to the Bequia Sunshine School and the Junior Sailing Academy Bequia in loving memory of Ron Cutajar.  https://grenadinesinitiative.ca/ron-cutajar-memorial-fund/

Thank you ALL for your incredible love and support!