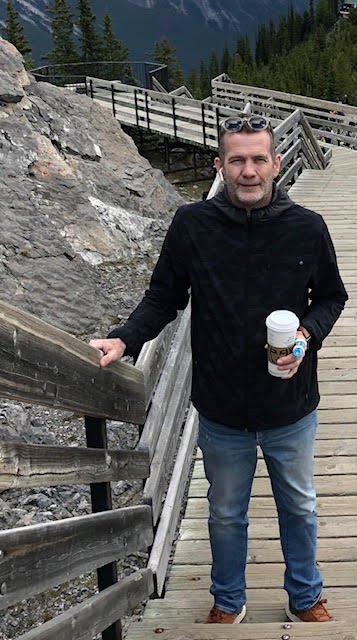 Steve, Stephen, Chef, Babe. Whichever moniker you referred to him by, he was always willing to answer your question, do you that favour, accompany you on an adventure, or tell you a story. As the only child of Anne and David, he was well loved growing up in Mississauga, Ontario. His parents’ devotion allowed him to try a number of sports, musical instruments, and hobbies; his parents’ discipline encouraged him to work a number of part time jobs as a teenager and young adult. His interests were vast and varied which made for great storytelling. Like the time he went to DJ a party in hilly Glasgow with his best friend, Bob, and did not put the hand brake on when parking the car. Steve ended up sprinting down the hill after the car, jumped into the driver’s seat while the car was moving and managed to bring it to a halt.  Or that time when he and Rohanna got stuck on the side of a cliff on Whistler mountain while snowboarding and had to be rescued by the ski patrol using ropes and rappels.

Steve was always up for trying new things and seeing new places. He worked very hard so that he and Rohanna could go on a vacation at least once a year (though it never seemed like work to him since his work team was part of his extended family). While Steve loved living in the city, he also craved the fresh mountain air and this took him to the Canadian Rockies to snowboard, the Niagara escarpment to mountain bike, the forests of Ontario for leisurely hikes, and, not to mention, the outdoor spas for much-deserved relaxation.

At home, Steve was also a devoted cat owner. It started with him tolerating Rohanna’s compulsion to rescue every single cat in Toronto. But he proudly accepted the role of Cat Dad, especially with the adoption of Li’l Mrs. They had a special bond as girls do with their Dads.  She may not fully understand what is going but she can tell something is missing. Not only was he a devoted Cat Dad but he survived also by his partner of 15 years, Rohanna. Steve always went above and beyond for her and loved spoiling her but most of all, spending quality time with her.  She was his adventure partner in life: they always got his-and-hers bikes, boards, rackets. They were best friends.

Stephen’s father, David Nisbet, died years ago when he had a heart attack while driving on the 401 highway. He had the good sense and selfless intention to pull the car over so he would not cause any collisions and injure anyone else. This quick-thinking ability and empathy for others was passed on to Steve. Many of us had the pleasure of meeting or getting to know his mom, Anne Turnbull who was a writer and clearly who Steve got his storytelling abilities from. After his parents’ divorce, Steve saw how his mom worked hard as a single parent to keep him at the standard of life to which he was accustomed. It is no wonder that Steve was a self-proclaimed feminist. He truly believed women could do anything men could and some things even better. This was evident in the way he encouraged his partner Rohanna to pursue any and all new sports, hobbies, or education that piqued her interest. He would also have talks with his niece, Amy, to try to instill in her the same confidence he saw in all the strong women in his life like Mayra, his sous-chef, and Anjie, his “mother-in-law”.

Steve did not have much a of social media presence. He preferred his human interactions in real life where they actually have meaning and can make an impact. And an impact they did make. If you knew Steve then he probably taught you something or gave you something that changed your life, if even in a small way, but that you will carry forever. So, it’s time to say goodbye but also to say thank you.